This is an artbot informed by DIY aesthetics that dictates the usage of common electronic waste. The piece which is made out of recycled materials skitters unpredictably while flashing a large blue led. In a whimsical manner it harkens back to wonderful summertime childhood experiences collecting bugs. 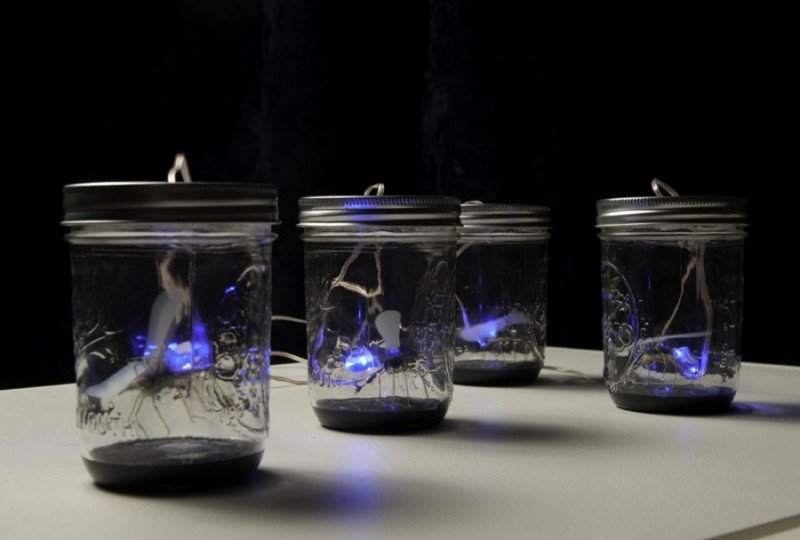 This is a 7.5 foot tall piece fabricated with repurposed architectural forms, recycled power cables, wooden dowels, speakers and blue LEDs is a biomimetic work based on firefly light signaling. A microprocessor connected to a network of blue LEDs has been programmed to mimic the mating call of a North American firefly. The acoustic component of the piece is a sonic translation of the rhythm of their calling pattern.

The Firefly Grove is a wonderful interactive light and sound art work that mimics the fireflies’ illumination patterns. This project addresses the commonly heard statement in RI of “where have all the fireflies gone.” The public art work reminds people of the magical presence of the firefly and its loss due to light pollution.

Mixed Media with audio, circuit and 3d printed fireflies, 34”W x 6” D x 20” H. This work combines the stop action motion of the firefly’s wings in flight with the sonic translation of the rhythm of their calling pattern. The stop action concept was first created by Eadweard Muybridge in his famous studies of biomechanical motion.