The exhibition “Cassini’s Dreams” was held at the Venice Biennale. It was an interactive installation that included painting and a virtual reality app. The installation featured an inflatable of Saturn being “read” in real time by a Cassini laser-to-audio system. This produced a rich audio experience, built from raw data and artistic interpretation of the two decades of Cassini’s tour. There she was our virtual eyes and ears on Saturn. As the probe swept past the gas giant it traveled above and below her rings. It swooped down on the moons and flew through the icy plumes to hover above methane oceans. It also zoomed past shepherd moons that guide ring particles in their orbits. Finally, as it it spied on the propeller moons it enables us to see their internal waves.

The paintings are also inspired by the rings of Saturn as they were seen by the Cassini. For this body of work China Blue utilizes the infrared color spectrum. We can not see in this color range but with China Blue’s usage of the palette she makes visible the invisible. She also cites this scientific application which helps researchers see photographic images in high detail.

The Discovery of the Sounds

The discovery of the sounds of Saturn’s rings was created for NASA by China Blue and Dr. Seth Horowitz. This audio became the bases of the sound art album, Cassini’s Dreams created with Lance Massey the creator of the T-Mobile ring tone. Click here to listen to the work.

The final element, the Virtual Reality app is a wayfinder that can be used in Venice to find the exhibition. It can also be enable those who are not able to attend to see it. Like Cassini’s search for the Saturn, the app enables everyone to personally explore Saturn and her rings with their phone.

This work is supported in part by the NASA/RI Space Consortium and Canada Council of the Arts. It is also supported by The Engine Institute a non-profit organization. The institute is dedicated to promoting artists working at the intersection of art, science and technology.

Stephanie Jeanjean, Art Historian states: “as China Blue demonstrates…nothing is still nor silent. The void is filled with the sounds of in-commensurable invisible forces that can be heard by those who listen to them.”

Mat Kaplan of The Planetary Society says: The songs are both “beautiful and evocative.” 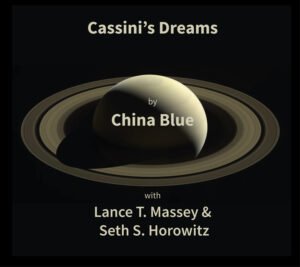 The sound art album “Cassini’s Dreams” brings to life some fascinating unheard aspects of Saturn’s rings. In 1610 Galileo was the first person to observed Saturn. To this day Saturn is still one of the solar systems prime objects of wonder.  In 1997 NASA launched the Cassini probe. She traveled on a ten-year voyage to study the Saturn system getting closer than any human object had ever been before. During the mission, Cassini sent back over 400 gigabytes of raw data including over 400,000 images of Saturn, her rings and moons.  The vast majority of this information was in the form of black and white pictures and movies of the unEarthly beauty of the Saturn system.  However, the sheer magnitude of new information and the unexpected form it took, begged for new ways to explore the planet and the data.

Based on our discovery of her sounds for NASA we built this artistic interpretation of Cassini’s tour. “Cassini’s Dreams” is a rich sound art experience. There she was our virtual eyes and ears on Saturn. As the probe swept past the gas giant, traveling above and below her rings, swooping down on moons to fly through icy plumes, above methane oceans, past shepherd moons guiding ring particles in their orbits and spying  on propeller moons as  they create delicate internal structures and waves. These were two decades of wonder and data collected, until Cassini finally plunged in her death throes into the cold cloud tops of the planet itself.  “Cassini’s Dreams” lets you join Cassini in her exploration of the giant ringed planet nine times as far from the sun as we are from Earth. END_OF_DOCUMENT_TOKEN_TO_BE_REPLACED