Artist China Blue and auditory neuroscientist Dr. Seth S. Horowitz have just finished their third session at NASA’s Vertical Gun at the Ames Research Center in Moffett Field, California, recording hyper-velocity impacts in the giant near-vacuum chamber  that lets  planetary geologists simulate and understand the forces that have shaped terrains on earth and throughout the solar system.

While busy enough with their individual fields, Seth and China Blue have worked collaboratively for over a decade, merging science and art through the overlap of their mutual love of sound.  During a conversation about NASA projects focusing on the type of high velocity impacts simulated in the Vertical Gun, China Blue said “I wonder what the impacts in the chamber sound like.” That simply posed statement identified acoustics as a previously ignored area of research over the 50 years of research at the gun, said one of the Vertical Gun’s principal investigators. And, that was the beginning of their research project that continues to today.

In the beginning, the idea was to first find out if the sound could be picked up in the massive steel chamber, especially given that many of the experiments were run at pressure levels closer to those found on Mars than on Earth, reducing the efficacy of most normal microphones.   The first experiment would require testing a large array of recording devices to find out what the recordings would sound like and what type of gear could survive near outer space levels of vacuum. They used geophones, low frequency seismic recording devices that are used to detect earthquakes, ultrasonic microphones that are used to detect gas leaks (and bats), piezoelectric microphones which are a general all around recording device as well as normal pressure zone microphones used to record music. They first wanted to see if the microphones would survive the impacts and if so what frequencies would be measured. The results were much better than expected. While the low pressure level reduced the amplitude of the sound at the air-borne recording devices, and the ultrasonic microphone picked up nothing at all, the geophones were particularly sensitive to picking up the vibration transmitted from the projectiles’ impacts.  The geophones were successful in documenting a full range of sounds from the vibrations that traveled down the gun barrel, through the dolomite in the pit and those that ricochet off of the walls of the five foot diameter chamber. In addition, most of the microphones successfully survived the experiments, with  only the two pressure zone microphones \which were not happy after being struck by ejecta fragments moving at several times the speed of sound.  As a side benefit, the microphones picked up 60 Hz noise which was helpful in finding a grounding issue in the chamber. 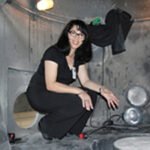 The second trip was in the summer of 2014 when we worked with a graduate student from Brown University who was measuring the atmospheric shock waves produced by impacts as a means of modeling forces that helped form features on Mars.  On that trip, we simplified our process by not using the ultrasonic detectors and refined the method of attachment of the geophones. (We were thrilled to find out that duct tape is as critical in NASA research as it is at home).  The data from that session helped us determine the way the impact-induced vibration propagated through the ground (in this case, crushed dolomite) and gave indications about how the shock wave could be differentiated from impact-driven winds that travel behind it.

The most recent trip let us build on our previous experience and refine both our measurements of surface wave propagation and rapid changes in atmospheric pressure in coordination with the principal investigator and graduate student again.  This time we were able to compare our geophone and atmospheric recordings to her instantaneous pressure data to give precise measurements of the timing of expansion of shock and pressure waves after an impact.  While this may sound like a very focused finding of interest only to planetary geologists, it is actually critically important for our understanding of how our Earth was formed and how landscapes emerge and change over time, but also for predicting the results of possible asteroid strikes here on Earth.  This information is critical for developing ways to prevent the widespread damage that could occur if another large asteroid approaches Earth.  We are excited to say that our experiments also showed that recording of sound and vibration can be used to gather data as important as the images captured from the 50,000 frame per second cameras (which are much more expensive).  When attended to, sound provides critical information about how the world around us behaves, whether by listening traffic noise, or by listening to the shattering impacts at meteoric speed.