Microphone with view of the Esplanade du Trocadero.

Some of the equipment.

Sounds of the Eiffel Tower.

Vibrations of the Elevator

Vibrations of the Elevator 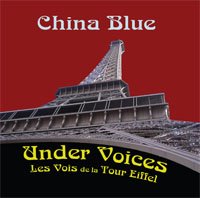 The Wind and the Accordionist

The Wind and the Accordionist

The Woeful Tale of Jack the Snail

The Woeful Tale of Jack the Snail with Lance Massey

I am artist who has worked with sound since 1995. In 2006 when I was wondering along the left bank of Paris I had the random thought that it would be cool to make a sound piece based on the acoustics of La Tour Eiffel. A year later after a trip to Paris I succeeded in being the first person to record the Eiffel Tower!

The organization in charge of running the Tower gave me access to the monument to document it’s ambient acoustics and vibrations – the intrinsic sounds of 7300 tons of 2,500,000 rivets and 18,038 pieces of steel moving in the wind and in response to environmental changes, as well as the sonic environment of the 30,000 people who visit it daily as they move from the ground to the pinnacle. With the enormous help of the onsite consultant and Chief Technical Officer, Seth Horowitz, PhD., who headed the technical team, we succeeded in not only recorded from the publicly accessible regions, but our guide, Olivier Picard, took us to the machine room, home of the enormous 100 year old gears and motors that carry the visitors up and down the tower and the security stairwell just under the top level from which we found sound and vibrations from the elevators and the wind against the structure.

The scientific technology used to record the structure was a combination of in-ear binaural microphones and custom designed seismic microphones.  The recordings that we captured are indeed fascinating as they represent both the physical nature of the structure as well as the human experience. With these resources I have been able to documented the sound of the wind against the surfaces of the steel, the intermittent rumbles as the elevators moved up and down as well as the vibrations from people walking. With the binaural in-ear microphones I captured the ambient soundscape. One great moment was in the machine room. There I was able to record the situation when one of the elevators briefly broke down! In that segment you can hear the alarm go off and the men rushing to the scene! (Seth said I broke the Tour Eiffel!!) On the top of the tower you can hear the comments eg: holy crum!

Until a recent change “Under Voices” was listed on the Eiffel Tower’s Official website.

Read “Recording the Eiffel Tower” in the link to Acoustics Today below.