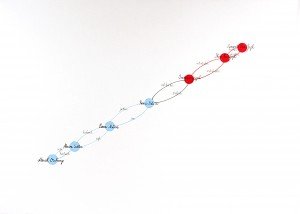 This image shows that Duchamp, through marriage to Alexina (Tiny) Sattler who was previously married to Pierre Matisse is connected to Henri Matisse. Henri Matisse was a student of Frederic Goupil (through his how to paint book). Frederic Goupil employed Vincent Van Gogh’s brother Theo as an art dealer, which connects Duchamp to Van Gogh.