China Blue is a sound based visual artist working in New York City and Providence, RI. She investigates sound at the intersection of science and technology while inspired by how our world is built from our sensations and perceptions. This emerging umwelt provides not only a basis for exploring the inner world of the mind, but also how technological extensions of our senses forecast a way to transcend their limits. Through her work she aspires to enhance audience’s perceptual world through investigations and explorations into bioacoustics, ultra and infrasonic sampling devices, brain wave monitoring, and robotic sensory avatars.

In the beginning of her career she was influenced by both early sound artists and basic concepts of sculpture. In considering them together she realized that sound was a form that filled a space. Thus she defined the internal architectural space as its own shape delineated by sonics. Using this as a jumping off point she has claimed an acoustic terrain based on sampling our sonic environments to discover what we don’t hear in our world and shaping the unseen with the unheard. Some of her artistic highlights have included sampling the Eiffel Tower to discover her voice, monitoring NASA’s Vertical Gun chamber to disclose the acoustics of the Tunguska event or sonifying Saturn’s rings.

She often works in collaboration with Dr. Seth S. Horowitz neuroscientist, space scientist and author of “The Universal Sense: How Hearing Shapes the Mind” and renowned composer of the T-Mobile ring tone Lance L. Massey. As a team they have discovered that innovation occurs by working together. 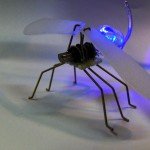 “as China Blue demonstrates…nothing is still nor silent, the void is filled with the sounds of in-commensurable invisible forces that can be heard by those who listen to them.”
states NY Art Historian, Stephanie Jeanjean

“China Blue’s work… has returned to the subject matter of nature in an effort to find either
new meaning or create new metaphors…”
Jill Conner, New York Editor, Whitehot Magazine and contributor to Art in America and Sculpture

RISCA Panel: The panel was unanimously enthusiastic about awarding this applicant the Fellowship Award.
The works employ technology in new and interesting ways and … the only one to explore robotics.

China Blue is an art pioneer who has received three NASA/RI Space Grants. One was for her research of the sound created by NASA’s Vertical Gun, a three meter tall meteorite impact simulator which shoots particles at Mach-10. Her project is the first proposal to study sound in the facility which has been in existence for 50 years. She is also the first person to record the Eiffel Tower in Paris and discover her voice and the first to reveal the sounds of Saturn’s rings for NASA. She was nominated for a two year Artist-in-Resident with the Norman Prince Neurosciences Institute at the Rhode Island Hospital. This residency is a role created for her and a unique to Rhode Island. She is a recipient of a Rhode Island State Council for the Arts, Fellowship and multiple Canada Council of the Arts grants.

As a pioneering internationally exhibiting artist in 2013 China Blue was the US Representative at Tokyo Wondersite’s Experimental Art Fair and in 2008 at OPEN XI in Venice, Italy an exhibition held in conjunction with the Architecture Biennale. In 2012 her exhibition at the Newport Art Museum “Firefly Projects” was nominated the “Best Museum Show Nationally by the International Association of Art Critics.

Reviews of her work have been published in the Wall Street Journal, New York Times, Art in America, Art Forum, artCritical and NY Arts to name a few. She has been interviewed by France 3 (TV), for the film “Com-mu-nity” produced by the Architecture Institute of America and was the featured artist for the 2006 annual meeting of the Acoustic Society of America. She has been an invited speaker at Adobe, Creative Tech Week, Harvard, Yale, MIT, Berkelee School of Music, Reed College and Brown University and an adjunct professor and Fellow at Brown University in the United States. She is an adviser to Rhode Island Congressman Langevin’s Committee for Art & Culture and Rhode Island State’s Art and Health Committee as well as the Founder and Executive Director of The Engine Institute.

“It is not about recreating beauty or capturing the accident but an intentional embrace of a condition.” Ai Weiwei